I guess there isn’t too much suspense as to the punch line of the story since it’s in the title, but I’ll tell the story anyways.
Today while taking a minibus from Kota Kinabalu to Kinabalu park in Malaysian Borneo, I was seated (more like squished) next to two women and two little girls. One of the girls was about 3 years old and wearing a hijab (headscarf); which by the way Allah doesn’t require of girls until puberty. The other girl was roughly a year to a year and a half old and sitting on her mothers lap. Thank god she wasn’t wearing a hijab too.

I was discreetly able to take a picture of the young girl wearing the headscarf.

So, if a mother is so extreme as to not only cover every part of her own body, but feel it necessary to cover every part of her little child’s body, you could possibly imagine my surprise when I look over to see this woman’s breast in the smaller child’s mouth. Perhaps it was even a little bit more shocking to me since we were sitting next to each other, touching, and my bare arm was about 3 inches from her breast.
Just to make things clear; I have no issues whatsoever as to women breast feeding in public. I just never imagined this was the sort of thing extremely religious Muslims did.
She most have done a good job though, as the baby was passed out for the rest of the journey. 😉 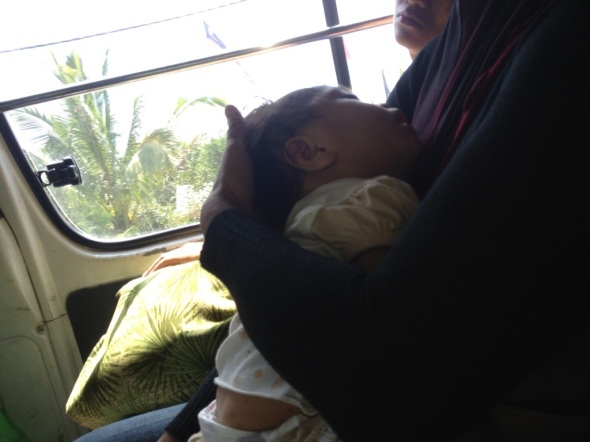 Ambuyat: The weirdest delicacy I’ve tried yet. »
« Getting a bamboo tattoo in Thailand